The miracle event believed to have occurred at Tabgha is the third appearance of Jesus after his death, as related in John 21:4-17. The church, which commemorates those events, is called both St Peter and the Chapel of the Primacy.

The first church was built at the end of the fourth century. Lady Egeria, who visited between 381 and 384, lists some steps on the shoreline where Jesus once stood.

The second church was built in the fifth century and presumable destroyed in 614. The third building was erected at the end of the seventh, begin of the eight century. In the middle Ages the church that stood here was known as Tabula Domini (Table of our Lord) or Mensa Christi (Christ’s Table).

The fourth small chapel was rebuilt sometime later, but the Crusaders found it in ruins when they arrived in 1099. They rebuilt it, but this chapel was also destroyed in 1187, after the defeat of the Crusaders at Hittim. Rebuilt in about 1260, the chapel was razed to the ground by the Mamluks in 1263. The Franciscan Custody of the Holy Land built the present Chapel of the Primacy of Peter in 1933. 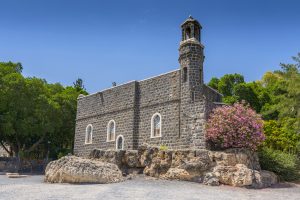